Football Taco Bowl Bites are hearty appetizers and are always a hit for game-day parties. They are like a seven layer taco dip….in your hand!

The Super Bowl is this weekend, and creating a robust menu of appetizers is ALWAYS front and center on my mind! Being a food blogger, the pressure is ON to bring “that” dish everyone devours. Couple that with the fact that my food niche is tailgating, and let’s just say Super Bowl Sunday is my biggest blogging (and eating) day of the year! These taco bowl bites are very easy and the flavor combinations are what we all crave during football parties.

So, I set out on a quest to develop a bite sized taco dip that had the flavors I wanted without that mess.

These taco boats are easy to hold and can be eaten easily in two or three bites. They are SO good – the secret sauce is incorporated into the meat.

You will note the guac and sour cream layers are missing – this was intentional to keep the taco bowls in tact without runny mess. If you miss ’em, feel free to add them back in…..just keep some napkins nearby!

The Players on the Field: ingredients to make football taco bowl bites.

Huddle Up:
How to Assemble Football Taco Bowl Bites

Get the kids involved on game day!

These appetizers are fun for the kiddos to make, too! While the adults are watching the game (or the commercials!) you can set up an assembly line at your kitchen counter. (Make sure you have an adult to supervise the kitchen fun!)

Put the taco meat, refried beans and cheese in separate bowls with a spoon in each. Let the kids have fun scooping and filling their Football Taco Bowl Bites! They can even place them on the cookie sheet, but have an adult close by to transfer the taco boats to the oven.

Tip: Once the boats come out of the oven, the cheese will be hot and can burn little fingers. It is best to let an adult add the salsa & sour cream on the warm boats. 🙂

For those who want to savor the taco boats instead of gulping them down, have a few chips around!

I know you will LOVE these Football Taco Bowl Bites. They are soooooo good. Here are a few other favorites from the blog:

I’d love for you to tailgate with me! Stop by the blog (Totally Tailgates) or follow along with me on Facebook. 🙂 Happy tailgating! 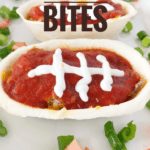