For easy and portable healthy snacks for kids that they will love to munch on, and you can easily pack for when you are on the go, grab a few ingredients and roll up a quick batch of Cinnamon Caramel Apple Energy Balls.

I'm always behind on the trends. My sister is the stylish one, and I'm the jeans and t-shirt girl. It's a good thing I have two little boys. If I had girls, well, I'd be in trouble. Home decor - forget it. Shabby chic, chevrons, seaside casual, formal elegance, I have no idea. My style consists of randomly dropped toys and socks and wedding and baby photos.

You would think that the one place I would be totally ahead of, or at least on top of the trends is in the food world. But I always seem to be a little late. I've been making granola bars, like these Banana Nut Bread Granola Bars, for awhile now. And while they are super yummy, they do involve mixing and baking and cutting. It seems the foodie world has moved on to "energy bars" made mainly from dates and other stuff pureed into a paste, smushed into a pan, and cut into bars. So I started playing around with a few different types, and my boys are loving these Double Chocolate Cherry Pistachio Energy Bars.

Except now all of a sudden bars are so last year. Now it's all about Energy Balls. Maybe people think they are easier. I'm not sure. You've either gotta press it into a pan and cut it into bars, or roll the mixture into balls. Six of one, half dozen of the other. But my little guys did think these Cranberry Almond Energy Balls I made were pretty tasty and fun, so I'll go with it. And my 4-year-old liked when I gave him a few gobs of the mixture so that he could roll his own balls. Definitely a better idea than giving him a giant knife to cut up his own bars!

However, while my boys do like munching on all of these snacks at home, when I am going to parks and other places where there are lots of other kids around, I try to consider that there could be other little ones with nut allergies. So I wanted to make a version that I could bring along on our spring and summer outings that didn't have any nuts or nut butters.

These Cinnamon Caramel Apple Energy Balls are a perfect snack for packing in your bag when you are heading out for a day of fun. They take minutes to prepare, aren't messy, and they are vegan, gluten-free, nut- and peanut-free, and totally kid-friendly, so you can pretty much share them with anyone! And caramel, you ask? Dates! Seriously, I didn't believe it when a fellow food blogger described them as "Nature's Caramel", but it is so true.

And if you have even littler ones, like Jenny and I, you can even make teensy little energy bites. I use about one-quarter teaspoon to make these little balls for my one-year-old. They are the perfect size for him to work on his pincer grip, and chew them up even though he only has three teeth. 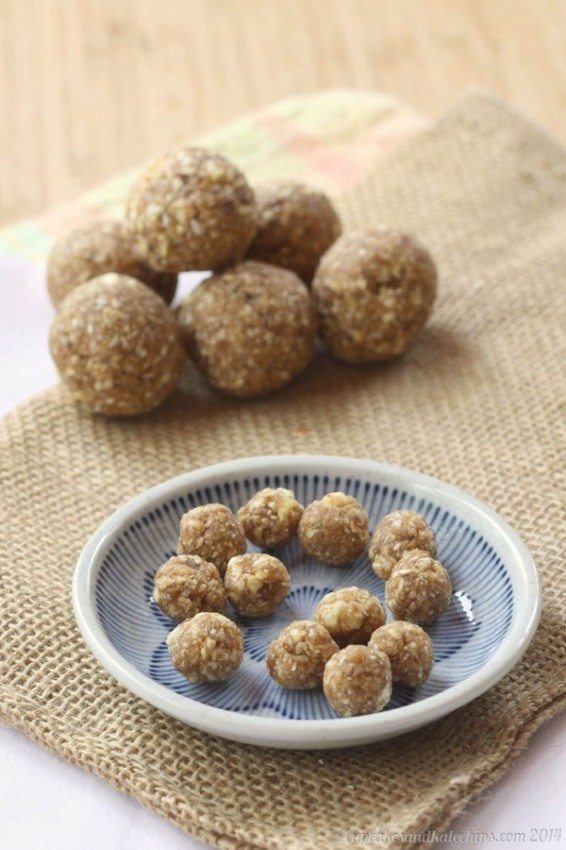 Brianne is a former chemical engineer turned stay-at-home mom to two adorable, but crazy little boys. She is the creator of and recipe developer at Cupcakes & Kale Chips, a food blog with a little bit of everything, reflecting her philosophy on balance and her love of making and eating both nutritious meals and decadent desserts. She also loves to share fun, healthy snacks that you can make for (and with!) your kids.