The Summer is here and I'm so excited to be joining you all from That's My Home and Recipes, Food and Cooking. I'm here today to share a fabulous recipe for Homemade Ice Cream.  It has all the flavors of a cake but in ice cream.  Plus, once you add the sprinkles, it is totally festive. Pretty easy peasy too! I decorated some ice cream cones and baked some cupcakes also.  You could say I kind of went crazy for sprinkles! I even dipped a few Oreos..... yes, it was sprinkled madness in my kitchen the other day.

If you haven't tried making your own homemade ice cream you are really missing one of the sweetest tastes of summer. It is a great memory maker for your children also. As a child, I remember going to my grandmother's on a Sunday afternoon and the entire family would be there and we would make ice cream. Back then we had to hand-crank the ice maker but it was totally worth it. We usually made vanilla or orange sherbet. One of my uncles would set it all up, the ice cream canister would be packed in the bucket with lots of ice and rock salt to help melt the ice. The ice cream makers had a plugin them and the plug would stay in until the ice cream canister was removed. Usually, after all of us, kids had a chance to crank the ice cream, the dasher inside would be removed, the lid put back on and more ice on top for the ice cream to ripen for an hour or so. The best part was if you were one of the crankers you would get an early taste from the ice cream left on the dasher. I think it was around 1965 when we got an ice cream maker with a motor to churn it. Now I keep a canister ready in my freezer for whenever the urge hits, no ice, salt or mess. I miss the dasher though! 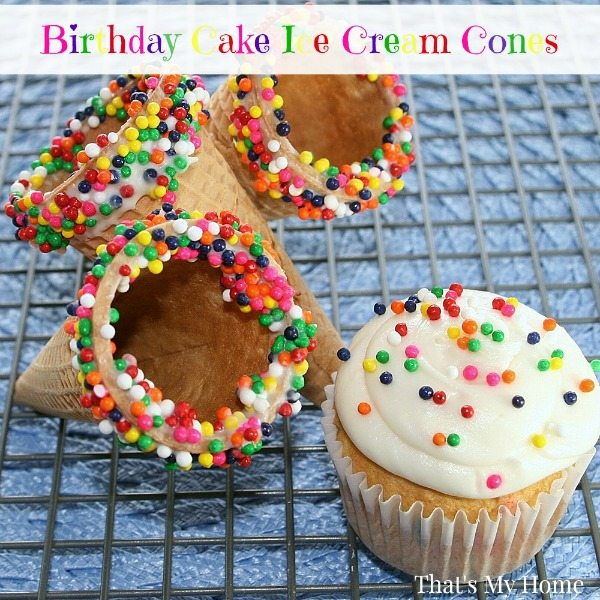 Remember how I told you that it was a sprinkle mess in my kitchen?  Now you see why and it was totally worth it.  Be sure to check out how I created the Birthday Cake Ice Cream Cones and hopefully your kitchen won't get as messy as mine. 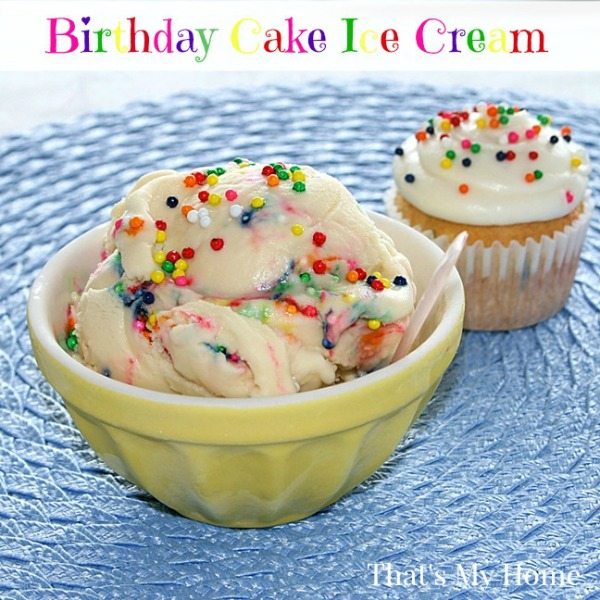 A few tips for making ice cream:
1. If you are using a canister type container, make sure it is thoroughly frozen before you use it. If it is slushy sounding when you shake it, put it back in the freezer until solid.
2. Ice cream mixture should be thoroughly chilled. Make it the night before if you can.
3. I add my add-ins like candies, sprinkles, nuts, ect. after it is finished in the canister. Stir them in with a big spatula or spoon and put the ice cream in a container and freeze.
4. When ice cream is finished churning in the container, put the ice cream in a container for a few hours in the freezer. It will harden up considerably in the freezer.
5. Pre-scoop the ice cream into balls for entertaining a few hours before you need it for faster serving. 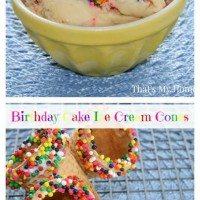 A homemade ice cream recipe perfect to celebrate any birthday or special occasion.
No ratings yet
Print Pin Rate 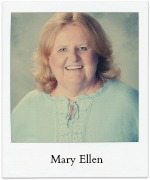 Crafts & DIY
Mary Ellen is the writer and creator of That’s My Home, Recipes, Food and Cooking, and Razzle, Dazzle Recipes. Mary Ellen loves to cook and bake and learned to cook watching her grandmother, mom and aunts in her grandmother’s busy kitchen. It was a magical place where it seemed as if the pot never emptied and there was always room at the table for one more.  It seems only natural that she would love to cook and bake so much.  She worked in her uncle’s restaurant all through school and continued on a culinary path for about 15 years including being a pastry chef at a big hotel.  She even owned a bakery for a short time.
Facebook//Google+ //Pinterest//Twitter
Pin
Share
Tweet
7Shares
« The BEST Grilling Recipes
Summer Grilling: Burger Bar »