Celebrate the season with these rich and creamy pumpkin cheesecake bars! A few simple ingredient swaps make them a lighter, healthier dessert, and with vegan and gluten-free options, they are easily adaptable to your dietary needs.

What makes these Pumpkin Cheesecake Bars a great fall dessert?

Hello Melrose Family readers! I'm Courtney from CourtneysCookbook.com, and I am so excited to be sharing this recipe with all of you today.

I am a self-confessed pumpkin addict. There is always at least a can or two of pumpkin puree in my house, but never am I more pumpkin-crazy than I am in autumn. From the beginning of September until the very last forkful at Thanksgiving, I will try to cram as much pumpkin in my mouth as humanly possible. 🙂 From pumpkin crème Brulee to pumpkin pie bars, I take pumpkin season very seriously.

I am also serious about cheesecake. Cheesecake is my family's ultimate favorite dessert-- the one we can all agree on. If we're celebrating something-- whether it's a holiday or a birthday or a special event-- the chances are good that we're also eating a cheesecake. It makes sense, then, to celebrate autumn by combining two of the things I love most!

How to make Pumpkin Cheesecake Bars?

I make a pumpkin cheesecake smoothie that feels like dessert in a glass, but nothing quite compares to the real thing-- and a smoothie doesn't cut it as a dessert for big holiday dinners!

These pumpkin cheesecake bars are a great way to put the finishing touch on a special meal, and they are an especially great addition to a holiday dessert lineup.

And as a bonus, they are healthier than your average cheesecake recipe. The crust is made without oil or butter.

The bars are made with Neufchatel instead of cream cheese, which means they are lower in both fat and calories-- and if you want them even healthier, you can substitute half of the Neufchatel with a cup of Greek yogurt!

You won't need any eggs, so they are easily made vegan with an appropriate cream cheese substitute. Need them to be gluten-free? There are a number of GF graham crackers on the market.

Making healthier swaps doesn't mean sacrificing flavor, though, and these bars are delicious (and approved by people less interested in healthy desserts than I am)!

The warm spices bring out the best in the pumpkin, and everything comes together perfectly with the slight tanginess of the Neufchatel cheese.

The rich flavors combined with the smooth, creamy texture make these a lovely and festive dessert for a beautiful time of year! 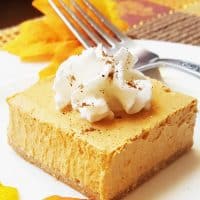 Celebrate the season with these rich and creamy pumpkin cheesecake bars! A few simple ingredient swaps make them a lighter, healthier dessert.
No ratings yet
Print Pin Rate

Thank you again to Jenny for allowing me to share this recipe with you today!